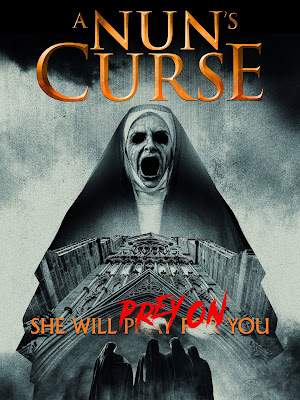 Forced to stop at various locations as the condition to using the family vacation home, a group of friends is forced to stop and take pictures along the way of various ruined buildings by the youngest member of the group. Stopping at an abandoned prison they are forced to spend the night when a storm suddenly comes up. The prison was the home of Sister Monday, a nun suspected of killing prisoners. The not so good sister disappeared before she could be brought to justice. Unfortunately for the group they will soon realize that disappeared doesn't mean gone.

While the film possesses some creepy moments and some really cool images A NUN'S CURSE is largely a case of covering well worn ground. Nor only does it check off the boxes for the evil nun genre, but also the haunted prison genre and the disappeared boogeyman (insert your favorite) genre. The result is a film that, aside from the odd moment never generates real scares. It's not that the film does anything wrong, it simply is taking the most traveled path imaginable.