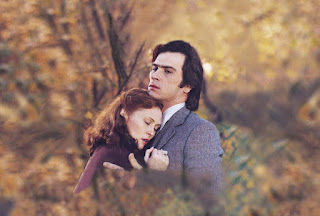 If Italian giallo films were originally inspired by American crime pulp and weird fiction, it stands to reason that eventually Hollywood would reciprocate and attempt to create their own. Though early attempts like Alan J. Pakula’s Klute (1971) mimicked the paranoid claustrophobia and iciness of their Italian forefathers, it would take Irvin Kershner’s Eyes of Laura Mars to properly emulate their surreal sense of the paranormal and unexplainable.

Case in point, the film’s driving plot device involves the psychic visions of controversial fashion photographer Laura Mars (Faye Dunaway) where she witnesses the slaughter of her friends from the murderer’s eyes. At no point does the film try and explain how or why Laura has these visions. Why should it? From the first moment we see Laura in bed surrounded by wall-sized mirrors, we know that this is a film about artifice, identity, and the lies people tell to justify themselves to others. Laura literally creates her own reality with her camera, one she can control to the finest detail. Her psychic visions are the tool through which this reality is interrogated and shattered; to try and rationalize them would miss the point and transform the film into cheap hoodoo horror.

Originally written by John Carpenter, the film attempts bold statements about the effects violent and sexual art have on society when the serial killer haunting Laura’s visions beings reenacting her lurid photoshoots populated by brutalized naked women and murdered men. Laura’s claim that her art reveals the ugliness of murder and sexual violence instead of merely exploiting it for shock value rings hollow when bodies literally start piling up.

But there’s a curious lack of thematic follow through as the film becomes a more typical whodunnit with a twist ending. Carpenter’s script was so drastically reworked by the studio he later called it “shat upon,” leaving one to wonder if the original version leaned more into the sex/violence angle. (This would’ve been typical for Carpenter who rarely lost focus on the overarching ideas in his own films even at their most madcap.)

In this absence of thematic consistency Kershner turns the film into an exercise of stylistic excess—grotesque photoshoot montages, creepy first-person tracking shots, thrilling chase sequences. This, too, does justice to giallo. Remember, for every Argento masterpiece there were dozens of giallo that had little interest in being anything more than shocking and morbidly beautiful.
Posted by Steve Kopian at May 09, 2020