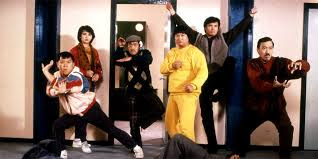 Oh so, lemme tell youse guys about this fight scene. So, Jackie Chan is hot on the trail of a gang of yakuza hiding beneath a Japanese theme park. Wearing an Arale Norimaki mascot costume, he sneaks into the entrance of their subterranean base disguised as a Japanese-style haunted mansion. As he navigates the twists and turns of the mansion’s corridors, monsters from Japanese mythology jump out of the walls, the floor, the ceiling. Some are just animatronic props. But others are henchmen dressed like ninja or demonic geisha who attack him with the element of surprise. Armed with a sword and handgun, Chan shoots and slashes his way through them. He doesn’t just beat them up, he straight up kills these goons, blasting them at point blank range and impaling them with his sword. It’s a showcase of Chan’s manic comedic energy and physical precision at its very best, particularly a couple of stunts in an upside-down room. Elsewhere, a Hong Kong detective woman played by Sibelle Hu squares off against a yakuza killer. The killer disrobes her yukata revealing an 80s aerobics leotard beneath. And beneath the leotard is Michiko Nishiwaki, Japan’s first female powerlifting champion, in all her cut, muscly glory. It’s a moment internet memes were made for.

All this happens in the last thirty minutes of Sammo Hung’s My Lucky Stars, the loose sequel to his 1983 action comedy Winners and Sinners. These were the first two films in the Lucky Stars franchise which saw Hung lead an all-star ensemble cast of famous Hong Kong actors. And this emphasis on the ensemble is exactly why My Lucky Stars doesn’t work despite its glorious climax. The majority of the film is comprised of bawdy comedic set pieces. (Chan only has about twenty minutes of screen time!) Some of the sequences work—the best being one where the Stars try and order food via pantomime from a Japanese waiter who doesn’t speak Chinese, resulting in a genuinely clever dick joke. But most of the bawdiness comes from the Stars sexually harassing and assaulting Hu. (In one scene, Hung literally has to stop the other Stars from storming into Hu’s room and raping her. This horrific moment is made all the worse in light of the numerous rape allegations made against Eric Tsang, one of the Stars.)