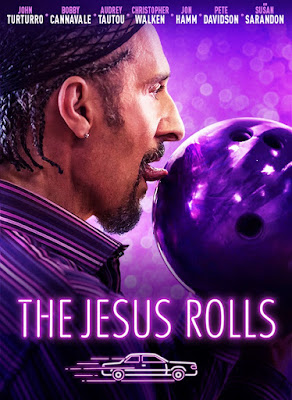 John Turturro writes directs and stars in THE JESUS ROLLS a semi-sequel to THE BIG LEBOWSKI. The reasons behind this are kind of lost on me especially since Turtutto takes his blink and you'll miss him character of Jesus from the earlier film and drops him into a story taken from the work of Bertrand Blier, particularly his film GOING PLACES.

The film has Jesus getting out of jail and picked up by his friend Petey. Along the way they steal a car, have trouble with an evil hairdresser, pick up some women and get into trouble.

Possessing  light tone this film is decidedly it's own thing. Moving through the world of it's own devising it is less a tale of our world than the one that the characters move through. It's a film with it's own odd rhythms that will either delight you or  make you wonder how this ever got made (then again maybe bother.)

While not the disaster that several people had told me it was THE JESUS ROLLS operates because we fall in love with the characters, Turturro, Bobby Cannavale, Audrey Tautou hook us and carry us along. They are aided by John Hamm, Susan Sarandon and others with the result we buy the craziness for some unknown reason.

To be honest I don't think it's a great film but it is an interesting one. I may not know why it exists but I am happy it does. It is the perfect sort of thing for anyone who wants something that is kind of Hollywood but really not. This is a film that is off in its own little world which is fine because that's where it is loved.