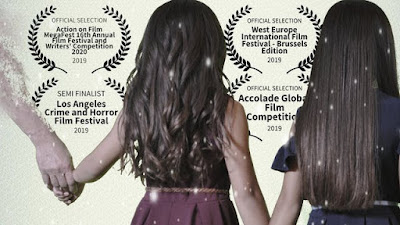 When their mother has a near death experience, two sisters find that a dark presence has entered their lives and homes.

Nice little low budget horror film has won awards across the globe.  Relying on mood and not jump scares this film may not sit well with horror fans who need blood and guts and a loud noise every ten minutes to make sure they don't fall asleep. On the other hand those who like films that are about plot and characters and not tricks are going to enjoy themselves.

You are going to forgive me if I don't do a big detailed review but after I agreed to take a look at the film I as told that the film was being changed, tweaked really, for its release beyond the festival circuit in October.  While I have no trouble taking a look at a film that's being worked on, I'm less willing to give an absolute word on the film until I know it's done. (I'm sorry I've had films I thought were great made good and I've had the reverse).  While I won't give you a final grade on the film, I will say that regardless of what happens this is going to remain a horror film is worth a look .
Posted by Steve Kopian at September 11, 2020