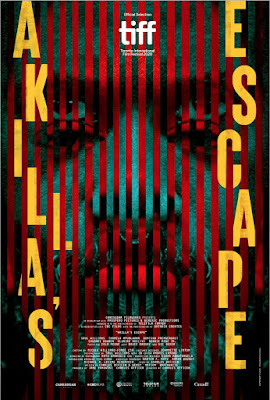 Full disclosure - I went into AKILLA'S ESCAPE kind of not 100% focused. YesI was interested in the film but I wasn't absolutely jonesing for the film. I knew it would probably be good, I tend to have good luck with what I cover at Toronto, but I figured that I wasn't going to be riveted to the screen for 90 minutes.

I was dead wrong.

From the opening frames AKILLA'S ESCAPE grabs you. The opening titles involving a Bob Marley song over old news footage of Jamaica set a mood. It beautifully pulls you in and makes you wonder what exactly we are going to be seeing. Then the film proper starts and the tale of drug trader Akilla fighting for his life after a robbery goes wrong and he ends up trying to protect one of the robbers who mirrors himself, while at the same time trying to make things right with his bosses just  grabs you and makes it impossible for you to look away.

All hail director Charles Officer. I have not seen any of his earlier work but his creation of this film makes me want to see everything he has done up to this point. Wow and wow. Rarely has any film, let alone what is nominally a crime film been so assuredly directed. Forget the Hollywood work of Scorsese, give me Officer's realism  It all feels right. Everyone on screen is wonderfully alive. I was ten minutes into the film and I all I could think was "who is this director and why the hell haven't I heard of him before".

And never mind that the crime portion of the filmi s so good, what really kicks this is the fact that Officer is telling also balancing a story about the effect of crime and life on the fringe and as a minority as well. Too often these days filmmakers can do one thing but not another. Officer if juggling several things at once and using each to not only make his points, but also further enhance the story. He gloriously has the various threads inform each other so that we are never seeing threads but only a magnificent tapestry.

I am in awe of this film and the man behind it it.

If you need proof ho much I love the film consider when it was done I was emailing friends and other writers to say they had to see AKILLA'S ESCAPE.

To be honest I on't guarantee that you will be as over the moon as I am about the film, however I will say that I am certain that you will like the film and it's characters more than most crime centered films that you've seen in the last year.