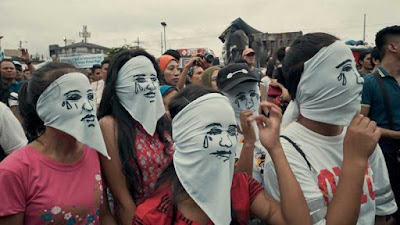 Hard hitting look at what President Rodrigo Duterte  is doing in the Philippines is effecting the people in his country. I’ve been watching a lot of films on the madness, and still this film rocked me.  For give me but sitting and watching a bunch of unsupervised kids trying to get along because their parents are either dead or locked up because they are drug users is incredibly sad.

Duterte clearly doesn’t give a shit, which is so sad.  His country has become a killing field where small fish die and the drug kingpins remain untouched protected by money and connections. Listening to everyone talk it’s clear that everyone who has been touched by violence is afraid and that the police are essential seen as murderers. They are causing the disorder they are claiming to want to stop.

If you’ve seen other films on the Philippines you will have no doubt seen some of this and some of the people  (Orly Fernandez the subject of the excellent THE MORTICIAN OF MANILA appears) however you have not seen it presented like this. This is a street level view of things and it is the most human, most real film on the subject I’ve seen.