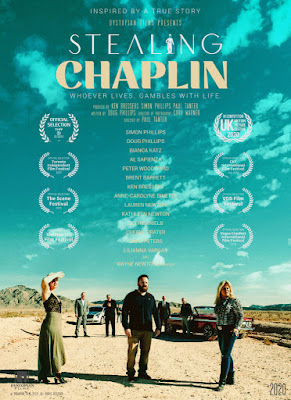 Two dimwitted British con-men living in Las Vegas steal the body of Charlie Chaplin in the hope of getting enough money to payback the loan sharks the are in deep to. The trouble is things go horribly wrong and it looks like the pair may end up as dead as the body they have stolen.

This amusing mix of comedy, caper and crime will entertain the hell out of you if you let it. While never quite reaching the heights of say the Ocean's 11 films, STEALING CHAPLIN works because the cast is good and invested in what is going on. Sure our heroes are really morons but they are loveable and we like then enough that we don't want anything bad to happen to them. While never fully believable, the film is firmly in the low budget inde film world, we really don't care because we are fully invested in what happens.

I had a blast watching this film. This is the sort of film that back when we cold go to the movies I'd go to with my dad to get out of the house. It is also the sort of film we'd eat up when we ran across it on  cable (hey wait stop, that looks good)

STEALING CHAPLIN is a small gem of a film. It is a perfect film to take in at the Festival of Cinema NYC's drive in Friday night.
Posted by Steve Kopian at September 30, 2020