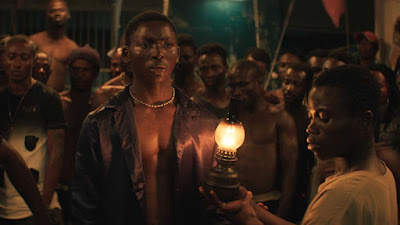 Night of Kings is the first of the New York Main Slate Films that feels like it belongs on the Main Slate. An arresting tale that puts New Yorkers (and audiences) in a place they never had been before. It engages us on various levels and makes us go WOW at the sheer audacity of what we are seeing.  While it may not be perfect it is a cinematic meal that knocks our socks off.
The premise has a young man being brought to a prison. He is raw meat and the prison is essentially the wild west where the guards let the  prisoners govern themselves. The head man inside is dying and he knows his days are numbered. He has plans for the young man who he declares is the new “Roman” or storyteller.  The young man will have to entertain everyone.  What the Roman isn’t told, at least not right away, is that if he ends his story before morning they prisoners will kill him. Desperate to stay alive he begins to spin out the tale of his friend Zama, a notorious crime lord who was just killed.
What follows is pure magic. This is a tale about stories and survival and life that spins out in so many different ways. This is a film that uses every type of storytelling device it can muster to suck us in and drag us along. Because the film essentially blends stories, recreations and reality with song and dance (the prisoners will spontaneous move or chant in response to the tale)  I’m guessing this is going to be something that ends up on the stage.  I was amazed at every turn.
While I don’t think the film is perfect, I think it get s a bit too mystical toward the end, I still think this is a glorious piece of filmmaking. This is the sort of film that I go to the movies for…and in truth this is the sort of film that I go specifically to the New York Film Festival for.  Getting to see earthshaking, eye opening films like Night of Kings is why NYFF remain relevant and why it is a festival I return to every year.
Highly recommended.
Posted by Steve Kopian at September 24, 2020