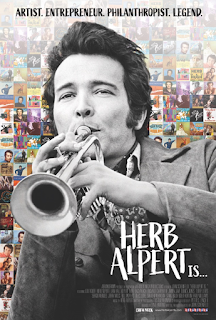 Oh yea, at this point you’re wondering where the deep conversation about the film is. Where is the critical analysis? There is none. This is a film you either love with all your heart or you’re simply dead inside.. Alpert is a cool dude who makes great music and art anything else is irrelevant.

There is no deep dark secrets. There is no tales that will change his legacy, there is only a man and his friends and his family talking about his life while we listen to the music he made either as the leader of his own band or as a producer. And considering all the hits be was part of this is the soundtrack of the last 60 plus years.

Again this film is a blast- which is all you need to know- so buy a ticket and enjoy
Posted by Steve Kopian at September 28, 2020