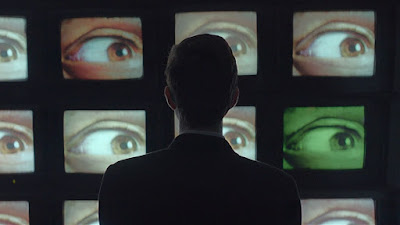 A new government directive has antennas for a new communication system installed across the city. At one apartment block the installation leads to a series of weird occurrences including the antenna oozing a thick black substance that bleeds through the building.

Full of slow building dread and an occasional wicked sense of humor, the commentary is very pointed about our obsession with screens, THE ANTENNA is a decidedly off beat horror/science fiction film. While the film  feels similar to other dystopian/1984 like films the film still manages to put its own spin on things thanks to a script which keeps us wondering what is going to happen next and what exactly is going on.

What I love about the film is it's visual sense. Yes it reminds us of other run down worlds we've seen in other films, but at the same time it manages to make it all seem new. Where exactly are we? It supposed to be Turkey but it could be anywhere. When is this taking place? It's not really clear and it pulls us in as we try to sort it all out. I was hooked and I couldn't look away.

If THE ANTENNA has any flaw it is the fact that the film is over long at 115 minutes. Yes the film is deliberately paced which helps it create it's own unique rhythms, but at the same time there is a point in the last hour  where it begins to feel long. I'm not sure what could be done to speed it up since this film is so deliberately put together, but at the sametime I lost a littlenthsiam for the film.

Regardless of my thoughts THE ANTENNA is worth a look for anyone who love dystopian science fiction.

THE ANTENNA hits Virtual theaters Friday and then VOD October 20
Posted by Steve Kopian at September 30, 2020