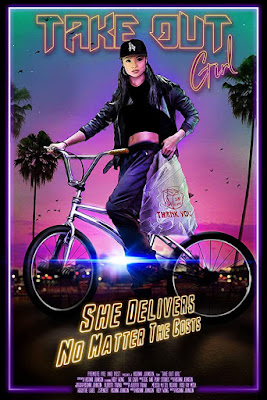 In order to save her parents failing Chinese restaurant a young Chinese woman decides to piggyback drug deliveries on to her food deliveries. It all goes wrong.

As based on a true story this is a solid little drama about the things we do to survive and how that sometimes is the wrong thing to do. It clearly explains why people want to get the hell out of dodge at any cost.

I was glued to the film for it's entire running time. Once things were set in motion I was so hooked that I didn't want to get up and get a snack lest I missed something. Considering I was watching the film a streaming screener and I could stop the film that is saying a great deal.

If there is anything wrong with the film it lies with Hedy Wong. I'm not certain who made the choice, the idea of having her be restrained and often monotone in her delivery for much of the film works against things. Yes, we know it is a kind of shield against the world but at the same time it prevents us from truly connecting to the character the way we should.

Quibble aside this is a super little drama and it is recommended when it plays at AAIFF.