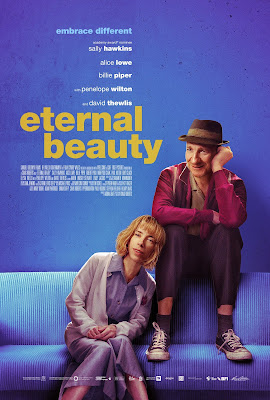 ETERNAL BEAUTY is all about Sally Hawkins. Hawkins gives an Oscar worthy performance in small gem of a film about a woman struggling to deal with her schizophrenia. Pushed to the edge by her boyfriend running off with her best friend Hawkins navigates life’s ups and downs as best she can.

To be honest I went into the film because the film  starred Hawkins and David Thewlis. I had no idea what the film was I simply agreed to see it on the strength of the two stars.  Thewlis isn’t in it that much, which is fine since Hawkins gives one of her great performances, which is enough reason to see the film.

Based on one of director Craig Robert‘s relatives Hawkins’ Jane is a plucky woman who is doing the best she can. Hit with highs and lows she rides out the waves as best as she can. What I love about Hawkins is she makes us buy the mood shifts so that we willing laugh and cry at what is happening to her. Because she is unwilling to do anything other than go forward we can’t help but root for to find happiness.

I loved this film a great deal and it is a must for anyone who love Sally Hawkins or great characters.