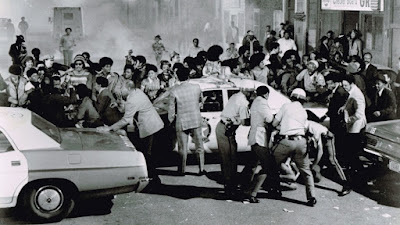 I am behind in talking about The Spook That Sat By The Door.  When I found out a restoration was playing at the New York Film Festival I went to dig out my DVD and got lost in trying to actually find it. As a result I missed the play dates of the film.

The film is based on the book by Sam Greenlee and  it has been rattling cages for half a century. It is the story of a black CIA agent who takes what he learns about over throwing governments and destabilizing regimes and teaches it to other you black men so they can work to bring about change. The politics didn’t sit well with the studios.  It was pulled from theaters when United Artists freaked out at it’s overt political message and feared what the film could do. They later buried the film by putting in the vaults  under another name.

Ivan Dixon’s film is a stunner. While it is a time capsule of the time that it was made, it is also a celluloid scream that shows us how little we have moved since then. Dixon captured a moment and feeling that for a large portion of America is still echoing across the land.

That the film is still relevant is a extremely sad. We should be looking at the film as a something that we moved beyond. If you need to know how far we haven’t come consider Steve McQueen’s Small Axe Anthology, which deals with many of the same themes in Dixon’s half century old film. Filmmakers should not be making similar films decades apart.

The Spook Who Sat By The Door is a vital living masterpiece. It is a living  historical document and something you must see, especially if you are watching the Steve McQueen films at NYFF or later on Amazon