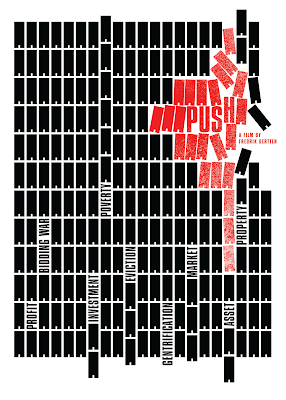 Push will make you physically ill. An exploration of the housing markets across the globe it shows how the real estate market is causing a crisis in housing by making it nigh impossible for anyone to either own a home or even rent an apartment. The film looks at why this has happened, what is doing to society and how it can be stopped.

I don’t know what to say but this film had me staring at the screen talking to no one I particular. Living in a town where the real estate firms are constantly trying to drive the market higher (A house in your town just sold for millions, why not sell your home for millions too?) I am watching what is happening first hand. I’ve seen the families being driven out and the death of communities (most of my home town’s business district is owned/occupied by the local bank because they are the only one who can pay the rents). I’ve witnessed the creation of dead zones as mega ritzy apartments have been built where no one lives because no one can afford the rent. Seeing it on screen my heart was broken.

This is a great film that lays it all out and probably make you angry enough to try and do something.