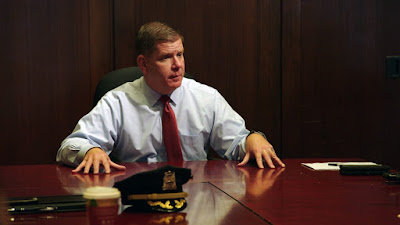 Frederick Wiseman’s City Hall is another marathon examination of an institution, in this case the City Hall of Boston Massachusetts.

Running a couple of minutes past four and a half hours the film follows the city’s mayor and the people who work in the building and use its services.  Even for someone like myself who is a civil servant in his day job it was an eye opening experience.

I find it really hard to critique Wiseman’s films. It’s not that they are bad, it is more how do you critique life.  You really can’t. Especially since Wiseman doesn’t interview anyone he simply sets his cameras and lets them observe. I find that all you can do is really discuss whether or not something is interesting. You could also discuss whether or not the reality Wiseman is presenting us is honestly the way it is.  I mean how much editing was done in each sequence? I’m not going to speculate.

While I found that some sequences ran a bit longer than they needed to, I found this to be one of Wiseman’s more interesting films. Who would have known that municipal meetings could be this interesting? Additionally it helps that the Mayor is such a character. Watching him go through his paces is quite entertaining. You completely understand how he got elected.

With City Hall Wiseman continues to delight me as a filmmaker. While I am not a full on Wiseman fan, I do like many of his films. Actually what really is amazing is that as he  goes on I am finding that the work he is doing is getting better and better,  Where years ago I would find his films a mixed affair,  I realize that the last four or five films have been so good that I would seriously consider picking up copies for my collection.