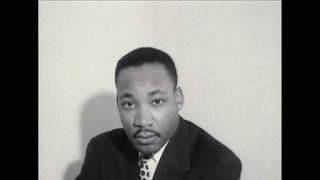 Nominally a look at the FBI's monitoring of and dirty tricks against Martin Luther King during the 1960's, the film also attempts to cover other ground as well. It is a good, but unremarkable documentary that is much too scattershot and unfocused to really score many points.

There are a couple of problems with MLK/FBI which prevent it from really going anywhere. The first problem is that despite being sold as having new material in it, we have been here before. While some pieces are slightly more detailed than in previous films or presentations, if you ave any knowledge of King and the FBI you've run into these stories. There was nothing here I really hadn't been aware of before, the only thing different was what was highlighted.

The other, much bigger problem is the film simply doesn't give s a real sense of anyone or anything. Yes we are given lots of details about what was done to King at certain times, but at the same time we don't get basic details. A lot of talk is about King's associate a Mr Levison, who was a New York attorney who helped King and had ties to the Communist Party. We hear a lot about him but we have no idea who he is. Other people around King are introduced but we are never clued in as to who they are- for example who was the man whose hose was bugged that clued the FBI in to kings affairs? We also don't know what Levison did for King other than he was trusted advisor. Additionally we get no sense of King or Hoover, there simply is an assumption you know who they are.

Worse yet for a film that is supposed to be about the FBI's treatment of King, it seems limited.  Other than bugging the phone and their watching his hotel room trysts and being frustrated hen their dirt is ignored they don't really tell us much. I would have liked to know more than Hoover hated him and bugged his phones and rooms. More was going on. I'm not selling it short but the details are so minimal you wonder why there is a film about it. I mean if you know the basics of King's life, which the film seems to assume you do, you know this already. The details are so lacking that the film keeps dropping the bits to go off to other things before coming back.

Watching the this film, one of my musts of the festival, all I cold think was "This is a NYFF Main Slate film?" Don't get me wrong, it's not bad but it is not something to be held out as exceptional at the New York Film Festival.

I was disappointed. Despite the promotional material, there isn't much here that anyone who has seen other films on King, or read any books on him hasn't seen before.