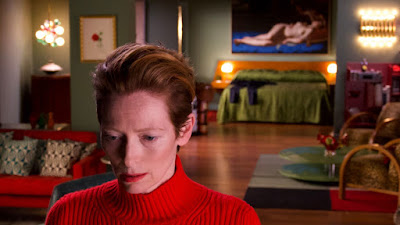 The Human Voice should be called Tour de Tilda because it’s a 30 minute masterclass in acting by Tilda Swinton.  Kenji Fujishima says that i was wrong and that it should also be called Tour de Almodóvar because of his technical virtuosity- and he is dead on point , but I am going to stay with the alliteration of Tour de Tilda.

The film is an adaption of Jean Cocteau’s  play of the same name about a woman on the phone with her lover who is leaving her for another woman. Largely set in a apartment created on a sound stage we watch as Swinton waits for her lover’s call…and then we watch as she tries to extend the call.  It is a film of rolling emotions that anyone who has ever been in love and dumped can relate to.

Almodóvar has made a true work of art. The look of everything is perfect. The camera moves and shifts into and out of “reality are as masterful as you will ever see.  Look for this film to be in the hunt for an Oscar.

Speaking of Oscar- Swinton’s performance is such that I’m guessing were it a feature it too would be in the Oscar hunt. It’s real and raw and moving and very very funny in the right mixture.

One of the treasures of the NYFF.