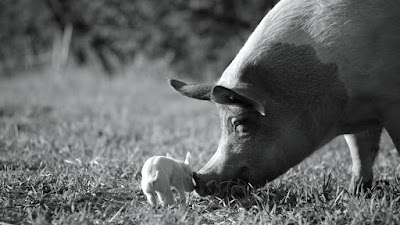 Black and white observational portrait of animals living on a farm focusing primarily a sow named Gunda. We begin watching not long after Gunda has given birth to a brood of piglets. We then revisit her and the piglets over the intervening months.

Before I start to talk about the film I should day this is not your typical nature documentary. There is no narration. There is no music. This is simply life in a couple of moments. I say this because I know some people are going to go in looking for a BBC or PBS documentary. This in't it. This is the camera watching events as they transpire without any sort of imposition stories by unseen voices.

The film begins with Gunda being woken up by her kids. She wants to sleep, they want to eat and they fight to get a shot at the milk bar. It's a charming sequence that illustrates that life isn't a bowl of cherries, mom might roll over on you.  From there we cut between other animals, some chickens and some cows and then back to the pigs.

The images are striking. I would love to have many of the images on my wall.

What really rocks about GUNDA is the soundtrack. A gorgeous and aggressive natural soundtrack puts you right in the thick of things. Its so stunning that if this was in color you would swear you were on the farm- hell while watching the film with headphones on I closed my eyes at one point and drifted off to somewhere green. (I'm uncertain how this is going to play as a drive-in film)

I really liked GUNDA. It was one of my top three must see films on the New York Film Festival Main Slate and it didn't disappoint.