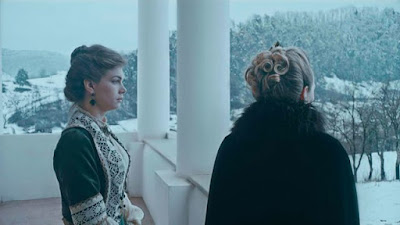 I've spent a lot of time trying to sort out what to say about MALMKROG.  This is a three and a half hour historical drama where five members of the upper crust talk about god, war and philosophy. When my brother walked by when I was done with the film he asked me what I was thinking and I said mostly that I wish I had seen the film at an actual NYFF press screening with other people because I wanted to hear the whole audience snoring.

Static and incredibly dry, the film is a series of long discussions shot very often in long takes. The camera barely moves. The cast arranged in tableaus. It looks like a frozen stage play written by the driest textbook writer in the world.

Don't get me wrong, I loved the arguments and the discussions, this is in my bread and butter, but they are so painfully written that it's like listening to volumes of a history of philosophy arguing. this isn't people this is ideas. There is no life anywhere in this.

And I know the hyper intellectual nature of it all is part of the idea- but not for three and a half hours. That's intolerable. You want something like MY DINNER WITH ANDRE or, closer to this film, MINDWALK. Bothe of those films discussed ideas with passion and humanity.

This is great discussions dully told.

Recommended only for those needing a long sound sleep.
Posted by Steve Kopian at September 19, 2020