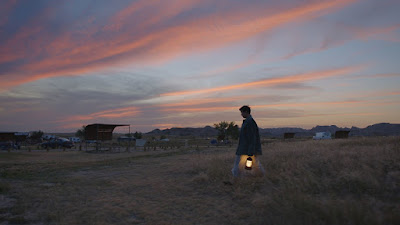 I want to say up front I think NOMADLAND is a very good film with a great central performance. Should it win anything other than a statue for Francis McDormand I will be shaking my head.

The plot of the film follows an older woman who is living out of her van. She is travels around the western part of the US working odd jobs and meeting people.

The film is a nice portrait of a part of life most of us don’t realize exists.  Unless we are living on the edge or sliding toward it we don’t realize that many simply can’t afford to live in a home. It’s a frightening thought, but it is a sad fact of life that kind of remains hidden because the people living like this are not on the streets in tents.

What keeps the film from being a truly great film is there is a preachy nature to the film. With the introduction of the life in your car guru the film shifted for me out of a straight drama and became more a polemic. The film started to explain things more than show them. Even when the film was showing us it still seemed like a lecture and a pep talk. I disconnected.

My other quibble with the film is with the casting of McDormand in the lead. As good as she is, expect an Oscar, I really think it should have been better with an unknown, or at least a less well known actress in the lead. Watching all the people around her I couldn’t help but marvel at how good everyone one is. They are stunning having a lived in quality to them.  McDormand on the other hand looks like a star slumming. While she projects inner strength she still feels like her boldest choice is not wearing any make up.

Nitpicks aside, NOMADLAND is very good and worth a look.