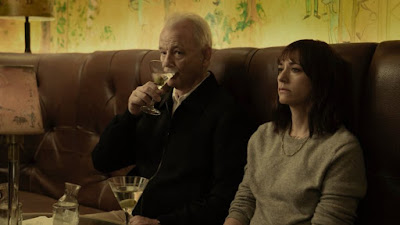 In ON THE ROCKS Rashida Jones contemplates whether her husband is having an affair while hanging out with her dad, Bill Murray, and drinking. Nothing else really happens.

Amusing, but largely laugh free comedy, has no reason to exist other than watching Bill Murray be Bill Murray. Normally that is worth something, but in this case it is pointless because there is only the slimmest of threads on which to hang his antics on. In all seriousness the film has no plot just Jones getting nuts about whether her husband is having an affair with the result we keep waiting for something. Nothing does. There is so little here that when the denouncement finally comes we are left wondering if that’s it. It is and we wonder why we wasted 90 something minutes getting there.

Sound and fury signifying nothing.

Seriously this film has no reason to exist. None.

And it has even less reason to be asking the audience for money. And lest you think that as a member of the press I shouldn't be saying anything since I get comped for many movies- this time I can say that because I paid to screen the film as part of the New York Film Festival. It as money poorly spent.

Did anyone actually see this exercise in emptiness before they booked it or did they, like I and several people I know, simply jump at the film which has (faint) echoes of Lost In Translation.

The film might have survived on Bill Murray’s charm but while he is a lead, he isn’t on screen enough to carry it.  The great Rashida Jones is completely wasted in a nothing role.  It is so underwritten that there is nothing for her to do but act as straight mans and mope. Seriously what does she do other than mope? Nothing that I can see.

What irks the hell out of me is that when I got to the end I thought I would take another quick look at the film again (or part of it) before the screening window closed. Popping the film on I started watching it and I instantly found my attitude toward things changed. Since I knew how it was going to go everything seemed even more pointless and vapid (like the Jenny Slate character Jones keeps meeting in the school hallway - why is she there?).  Worse I disconnected with the characters since they all seemed to be spoiled rich people who are nothing like the rest of us.

For Bill Murray fans only.

(and forget any Oscar talk for Murray. While he is playing a character he isn’t all that good)