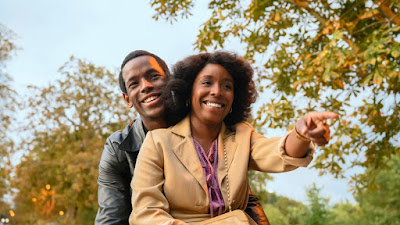 I should say that I am not huge fan of Steve McQueen. I find that I like his films but I don’t love them. I never fully connect to them emotionally…that was until I saw McQueen’s Lovers Rock, a huge ball of emotion – mostly pure unadulterated joy.

The plot is simple in 198- a young woman throws a house party for her birthday. As they set up and begin partying people arrive, dance, try to connect and forget their worries. While not all the worries are kept at bay, it is, for the most part a night to lose one’s self.

Glorious magical and some where beyond words, Lover’s Rock had me crying tears of joy several times. You could feel the life bleeding off the screen and drifting into your soul. It all felt right. There is a tactile quality to the film that makes it more real. Way back in the 1980’s, a few years after this film was set, I experienced a couple similar parties through a friend, and while they were different because of their being in New York not London, there was enough similarities that I really had to wonder how McQueen and his crew got a time machine and went back and filmed an actual party. (I also wonder how this would have been received in early 1980’s had it been released back then)

What I love about the film is that while the film focuses in a number of the party goers, McQueen and his cast actually manage to give the other people a sense of life beyond just being decoration. If you look at the fringes of the frame there is more going on then just dancing. There are moments or pieces of a story. We see actions that could be something if the camera chose to follow someone else.

I need to talk about the music but I don’t know where to start. It is utter perfection. The choices are stunning- even when the music stops and the singing continues. Frankly I don’t have the words to do this justice.

McQueen has fashioned a film that is just an amazing achievement.

I’ve barely scratched the offerings of this year’s NYFF but I would be hard pressed to not say this is one of the very best films of the festival and maybe 2020 as well.
Posted by Steve Kopian at September 17, 2020