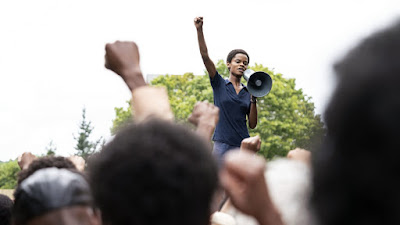 MANGROVE is Steve McQueen's portrait of Frank Crichlow who opened The Mangrove cafe in Notting Hill in London. The police didn't like a black owner business and constantly raided it and harassed the owner and it's patrons for no reason other than their skin color.  When a rally was held in support of the cafe  and against the police, the cops waded in and arrests were made. The 9 people put on trial...

For the second time at this year's New York Film Festival Steve McQueen hits one out of the ballpark with a true story that is still echoing today. Very much a film of the moment MANGROVE says volumes about the state of the world today. If you don't see the parallels then there is something seriously wrong with you.

Unlike many of his earlier films McQueen allows the emotion to flow through the film to fantastic effect. Where in many of his films McQueen kept us at a distance, here like in this film's sister LOVERS ROCK the director used a real feeling for the people on screen  to draw us in and connect with. The result is this becomes a film we love and want to watch again instead of just respect and give lip service to (I mean do you really want to watch SHAME again?)

I love that we see the human toll of the trial. For example we watch how Crichlow waivers in continuing his fight. At another point  we watch as a normally loving couple fight about taking care of their child and we see the nerves fraying.

If there is anything remotely amiss with the film  it is a kind of limitation with the medium. In compressing the constant raids down to rapid series of events the horrific police are made slightly cartoonish. The evil that these men represent is not a cartoon and McQueen never intends it to be, however because we only see it in a concentrated form so it could seem slightly overdone. Make no mistake racism of this sort if far from cartoony and much more insidious

Regardless of my quibble MANGROVE is a great film. Even if it wasn't of the moment it's a hell of a film on it's own terms and an absolute must.