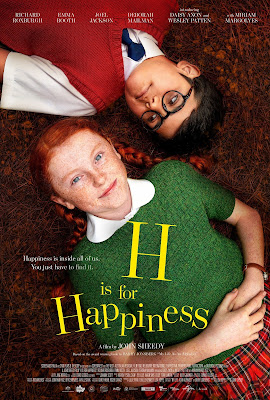 In Albany Australia Candice Phee is a one of kind young lady. No one seems to know how to handle her because she is very much aware of herself and everyone around her.As her life and the lives of the people around her go through the norml ebb and flow, Candice does her best to make everyone's lives better.

Feel good dramedy is an absolute must see. Nominally a family film, H IS FOR HAPPINESS is something considerably more. This is one of the rare films that paints a portrait of life as lived and not as we wish it to be. The film leans into life and embraces it and we are better for it.

I love that the film is aware that people are broken. There are emotional problems, misunderstandings and people hurt.  People and things are not perfect with the result that it all feels real. Yes we know it is always reaching for a feel good ending, but it doesn't matter because while the film is going for something uplifting it doesn't let us forget that there is pain. It's a choice that makes it all the more sweeter.

This film is a stunner. It is yet another film that I only took on because of Covid. Watching the trailer I thought it looked good but a bit more saccharine than I wanted to deal with. However with the film world exploded and films coming and going I decided to bite the bullet and give the film a try. I am delighted that  I did so because when it was done I was reaching out to my friends telling them they need to see this film.