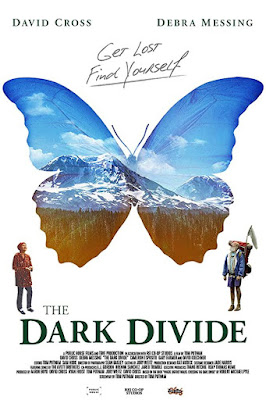 DARK DIVIDE is based on “Where Bigfoot Walks: Crossing the Dark Divide,” by Robert Pyle. The book is Pyle's  account of his walk through Washington's Gifford Pinchot National Forest following the death of his wife.

While most of this is a really good  film whose only real flaw is an occasional is an occasional dip into cliche (coming out of the darkness of the cave/doubt to happiness) there is actually little to say about the film except to say that whether you like the film or not will depend on how you take David Cross' performance.

Looking like a slightly heavier Pyle, he manages to get the physicality down. The problem is Cross' vocal performance. Making no effort to do line readings like Pyle we essentially are watching Cross walk through Pyle's life. The result was really mixed for me and I kept thinking this would have been better with anyone else. I say that because no matter what Cross was saying, even if it was something heavy I kept waiting for joke. It really left me wondering if Cross can act at all.

If you are a Cross fan this film is for you. If not proceed with caution.
Posted by Steve Kopian at September 16, 2020