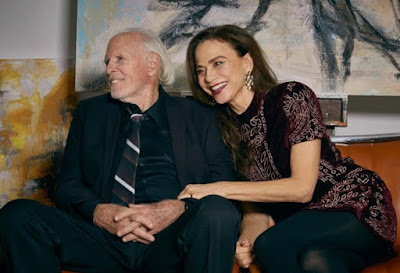 Lena Olin stars as the titled character. She is the long time wife of artist Bruce Dern. as the film opens Dern is beginning to show signs of dementia. Olin has to navigate the changing landscape of their relationship, and decide if she should return to the world of art, which she gave up when she married her husband.

Good drama is buoyed by the performances of the two leads. The film begins and ends with Olin and Dern and it is because of their stellar work that we keep watching.  That may sound like a knock against the rest of the film, but it's not really. It is simply that the pair is incredibly good it is hard to talk about, much less notice anything else.

If you want to see two titans of acting at the top of their game then see THE ARTIST'S WIFE when it hits theaters tomorrow.
Posted by Steve Kopian at September 21, 2020