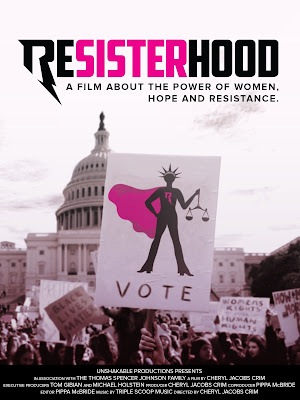 Excellent profile of a half a dozen women who decided in the wake of the current President’s ongoing bad behavior to march in support of women, minorities and repressed groups.

As America fractures more and more thanks to a president who knows he can only rule by telling blatant lies and dividing the country along deeply held hatreds, it’s nice to see a film about people not buying the bullshit. The film is a nice portrait of people who actually care about their fellow human beings. It’s a nice reminder that there are people who are out there fighting the darkness.

If there is any problem with the film it is that is coming just as there are a glut of political films. Everyone is putting out political films in the hope of winning hearts and minds. While this is a hopeful sign because it shows that there is a light in the darkness, it can make small gems like this difficult to see because either they aren’t being pushed or more likely people are too burned out by all the other films.

Do yourself a favor, even if you are burned out on political films, give this film a try. It is not only good time with good people but it will remind you that there is light amid the darkness and hope for tomorrow.
Posted by Steve Kopian at September 19, 2020