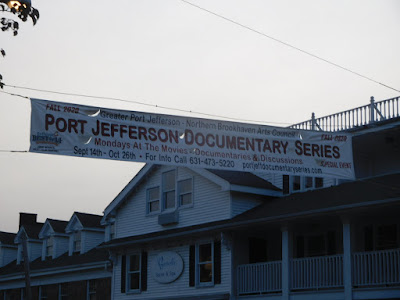 It may sound crazy, but six months into the age of Covid I actually managed to go to the movies. No it was not in a traditional movie theater, not was it at a drive-in , rather it was on the lawn in the village of Port Jefferson on the north shore of Long Island where the Port Jefferson Documentary Series had their opening night of the Fall series.

Now before anyone goes berserk we were all properly socially distant. Cones were placed 15 to 20 feet apart from each other and you could put your lawn chairs on either side of each one. Everyone stayed far apart, and remained masked. Wendy Feinberg, one of the organizers and I even remained masked for a photo to record our meeting for the first time after exchanging emails for four or five years. Of all socially distant events I’ve seen Port Jeff‘s screening was the best. They made all the precautions feel unforced and natural to the point you didn’t even think about it.

And if that isn’t good enough mother nature helped the natural ventilation by having a steady breezy blowing the whole evening. It may have blown the trees and rocked the screen a bit but it just made us aware that we were in a beautiful seaside location.

In all seriousness this is how I want to see movies- I want to go to this park and watch movies at sunset with the water behind us. It made for magical experience unlike any other. I had an absolute blast being there. Yea, the location is about 90 minutes by car from my house but it is absolutely wonderful.

Actually the whole series is great. If you are on Long Island you need to go. It’s worth the trip. The organizers, Wendy included, are marvelous people. They are just great fun and eal film fans. I wish I wasn’t so hungry and dashing off to grab a quick bite to eat before the film because I could have and should have spoken to them more. Everyone was absolutely charming. What was also cool was the audience was fun. Everyone seemed to be talking to each other. This is what festival going should be like.

Seriously if you can go do so. This fall season is stacked with great films. Next Monday they are doing another screening in the park- this time of Barbara Kopple’s Desert One, and you have to go. Trust me the physical being in the park will do wonders for you, and the movie is great too.

Later on the series is going to do some virtual screenings and some real drive-in screenings and I highly recommend you do so. Partly you need to go because the series has a winner every night and partly you need to go because the series can use the support. Covid has reduced the size of the audiences they can host and as a result they are operating right on the margin. You might think that perhaps they should hang it up for a season, but I don’t think they can do that. The people who run and go to the series are a big hearted group of people who know that they can’t be locked away. They know that there has to be some sort of attempt at normal even if it is masked and socially distant. 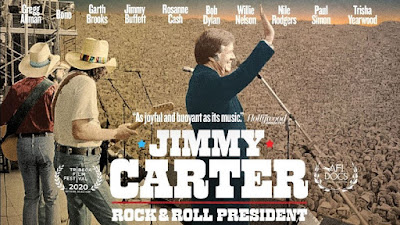 I know at this point you want to know about the movie – how was JIMMY CARTER ROCK & ROLL PRESIDENT?

The film is not a full on biography of Carter, rather it is a look at the relationship of Carter and the music world. Music was, and is, important to the former President and it was because of his relationship to music that he won over a nation.

The film charts how Carter’s love of music and willing to engage superstars like Willie Nelson, the Allman Brothers and Nigel Rogers won him friends and fans. Bob Dylan was taken aback when he first met Carter because not only was this the first member of the establishment he ran across who genuinely loved his music, but Carter also spoke to him as a person without condescension. They connected as people. It was something that happened time and time again and something that allowed Carter to connect to the fans of the various artists because they could feel the love of the President coming out from the artists.

Full of great music this film needs to be played loud. Thankfully the audio set up in Port Jefferson was great, with the sound never wavering and being loud enough that no one could hear me singing along. I hope the producers can get a soundtrack album out because it’s awesome.

Is the film perfect? No. It only covers certain aspects of Carter’s life which makes its shifting of his being distracted by being president feeling like it could have used a bit more meat.

Imperfections or no this is still a glorious celebration of a great man who continues to this day to change the world for the better.

Lastly once more thank you to the Port Jefferson documentary series for a wonderful evening. 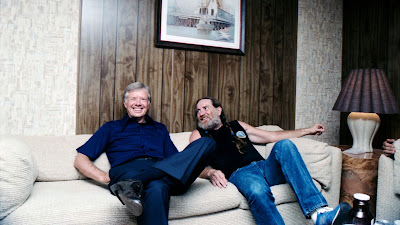