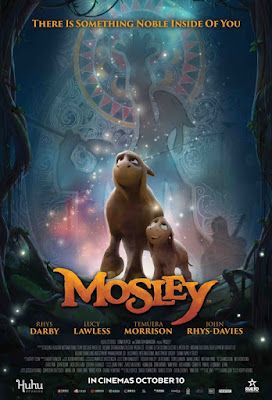 Mosley is a thoriphant. That means he is a cross between a horse and ox, however they are very intelligent. Forced to act as a beast of burden, he and his family work the farm of a not very bright famer. When Mosley's son finds a cave with paintings of upright thoriphants with hands Mosley realizes that the stories they had once heard were upright and they weren't always animals. Not long after Mosley flees into the wilderness he meets several right thoriphants who take him on a journey to their city. However Mosley is being hunted by man tasked with bringing him back.

Kirby Atkins' two decade labor of love is amazing. A kick ass film it will move you to tears. This is not a by the numbers tale by any stretch of the imagination, with the result that we are moved much more deeply than most recent Disney or Pixar films. Sure it has some bumps but its hear is so big that you can't help but love it for what it is.

What it is is a grand adventure of one man trying to save his family. Told with beautiful images, perfect voices and a magnificent sense of daring do, MOSLEY is the kind of film they don't make any more. It's a myth made modern. It's perfectly modulate to delight, move and inspire its audience. This is story of growth and hope and exactly the sort of film we need right now.

Of course the fact that the thoiphants are treated as slaves results in a biting commentary on the current state of the world where racism is rampant. Atkins hammers home the point with use of Southern American voices for the humans. On some level it could be considered being a bit too much, especially since the humans we see are the very definition of dumb rednecks, but make no mistake this film will do much to change the minds of people over the next few decades. 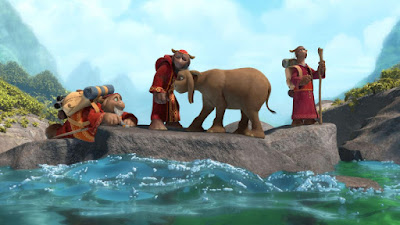