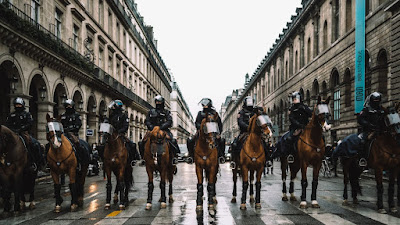 An examination of the use of violence against the police in France (and by extension any "free" country) mixes interviews with police, scholars, protesters and victims with footage of the protests in France.

A horrifying look at how the free societies are becoming more totalitarian is a real gut punch. The heady mix of theory and reality keeps us on edge and off balance, with the result that those watching the film will want to go out and slap some sense into our leaders....

I'm not saying that the film is bad or wrong only that the film kind of has its say fifteen minutes in and then doesn't go anywhere with it. The film stays the same from start to finish making me wonder why this needed to be 90 minutes.

Definitely an important film and a must see, don't feel bad if you feel the film is repeating itself and you trn it off.