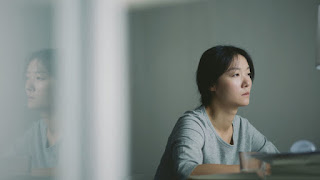 Lin is a director travels to Japan, China and Hong Kong to present her work. She meets some friends and rides a bunch of trains.

This mannered and formal film is exactly the sort of artsy fartsy film that the New York Film Festival has programmed since it’s inception. Full of gorgeous cinematography and perfectly composed images this is a film where the deeper meaning of everything can be found in the silences, things unsaid and the loving shots of majestic landscapes rather than in anything our heroine says or does. It’s the lack of any real emotional reaction that kills the film since Lin is little more than a cypher. There is nothing more to her other than a longing for something more which is indicated by her constant staring at snow, mountains, friends. A half an hour in and I was muttering at the screen since very little had happened except lots of traveling and a few moments of meaningless small talk.

To be honest I am not now, or have I ever been a fan of this sort of art house film. Clearly the festival organizers are, which is why we keep getting these small beautiful rocks year after year, but at the same time outside of the festival screenings these films are kind of doomed to disappear except in the minds of a few.

To be completely fair and honest Song Fang’s film isn’t bad, it is much better than her previous NYFF film Memories Look At Me, however too much is unsaid, too much is in the director’s head to the point the film remains a stunningly beautiful puzzle that we glance at and then walk away from, forgetting what we’ve seen. As much as I am bitching about the film I wouldn’t call it a failure so much as noble miss. I know it is splitting hairs but had we had character who was more than a blank slate this film would have been something more than a film we’ll quickly forget.