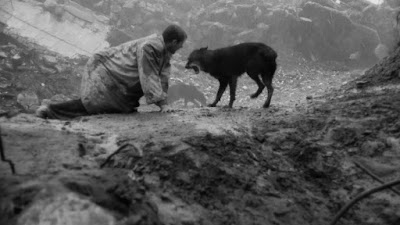 This film is one that is full of potential meaning, whether the director feels that way or not. To me this is a film where taking the film as the director intended, as a straight forward film, is not the best way to see this film. To me this is one of the few times when the creator 's work is not as he has intended but has instead become something else.

Bela Tarr's mediation on interpersonal relationships (and perhaps, the end of the world) is a simple tale of a man in a small town who is obsessed with a singer in a night club. She's married but doesn't completely deflect his advances. Where it goes is the story as the man pursues what his heart desires.

Dark brooding tale filled with Tarr's patented long takes seems to be set in another world or another time (perhaps it's an after life). It's a hypnotic trip about the nature of obsession and how we view ourselves. If you click with it and its possibilities this is a great rumination on a variety of things, if not it's a pretentious and tedious exercise.

I've read that director Bela Tarr insists that the film (as he insists about all his films) is a portrait of life "as it is" but I would be hard pressed to say that this is any sort of reality except perhaps a reality of the internal. The film's stark and beautiful black and white photography creates a world that seems forever in a mist or rain. It is a place like our own and yet different.

People speak in ways that don't seem wholly normal. Verse is quoted as is the bible. No one speaks that way. Musicians play music but how they play doesn't quite match up with the music we hear. The mine carts that we see over head seem to be moving the damned to and from this place and not ore (indeed we never see either end of the line). Tarr says there is nothing allegorical or metaphoric implied or intended but I would argue that the film doesn't function as a straight narrative. Too much is off kilter, too much fails to connect for this to be real life.

I'm not saying that the story of obsession, of a man doing what he feels he must to obtain the object of his desire doesn't work if it's taken as straight tale, it does, but at the same time the film becomes a battle with tedium. There becomes no reason for the film to run two hours, for the odd passages of dialog or the long takes. Frankly if the film is taken as the director intends it to be, then the film is a crashing bore and a failure on anything but a basic level. The film only works on some other level that isn't straight reporting, certainly the much used term 'apocalyptic' that I've read and heard connected to the film is appropriate in some sense.

Having been a creator of various things I know that sometimes the works we create change or become not what we intend. I understand that the creator of say a film is the one to ask what he intended but at the same time that doesn't mean what he intends is what is there on the screen. I think Tarr thinks he made one thing however I think he ended up with something else instead. I think as a film that is open to our own interpretation, being real world or not, the film is a masterpiece and a trip ripe with possibilities. I think as a straight tale of people locked in a straight forward battle of possession of each other it's a crashing bore filled with WTF moments. As something else, of souls elsewhere or even inside of themselves, it's a trip.

See the film, take it for what it is, or take it however you wish to take it, but see it and be carried away.
Posted by Steve Kopian at September 19, 2020