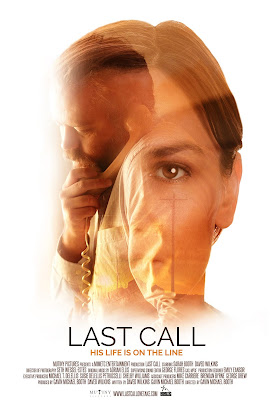 What makes a gimmick a gimmick as opposed to a stylistic flourish is that a true gimmick is used to cover up a lack of substance; it’s a distraction, not an enhancement. Consider the use of cinematic split screen. Great filmmakers have used it for everything from enhancing tension in thrillers (e.g. Brian De Palma) to avant-garde experimentation like the climactic French flag montage at the end of Abel Gance’s Napoléon (1927). But more often than not, such gimmicks exist solely to grab curious spectators or to confound audiences with pretensions of intellectual esotericism. (*cough* Number Two [1975] *cough*)

On paper, Gavin Michael Booth’s Last Call seems geared towards the sensationalist side of the gimmick spectrum: it consists of two simultaneous 76-minute single take shots in real-time in different parts of Windsor, ON. The film’s own marketing does it no favors—neither their festival press release nor their website give any actual plot details, focusing almost entirely on how it was made. One could be forgiven for assuming this comes from a distributor nervous about an underwhelming product. But no, in truth this obfuscation seems a more deliberate tactic to keep potential audiences unawares for what’s coming, for not only is Last Call one of the most powerful films of 2019 so far, it’s one that lives and dies by the gradual unfolding of its narrative being uncluttered of expectations of where it’s going. It’s not that it has plot twists or surprises, it’s that it’s about witnessing our own innate humanity in real-time.

The briefest of brief set-ups: while pulling a graveyard shift as a college janitor, young mother Beth (Sarah Booth) answers a wrong number call from Scott (Daved Wilkins), a depressed alcoholic who meant to call the suicide hotline. It’s a few minutes before Beth and Scott work through their initial confusion and realize what’s happening, and this stretch of unintended comedy twists into a harrowing portrait of compassion in the face of crisis as an increasingly frantic Beth tries to stop Scott from killing himself. This film could’ve easily been shot and edited like a traditional drama, but Booth’s Aristotelian conundrum of unified time and action but disunified space gives it a distinctly cinematic character that’s devastating in effect, reminding us that no matter our sins or circumstances, we’re all just human. Here is a true miracle of humanist filmmaking.