Miracle in the Desert: The Rise and Fall of the Salton Sea (2020) hits VOD, BluRay and DVD Tuesday 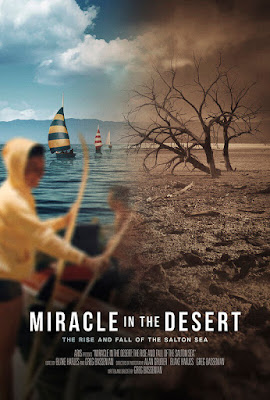 A look at the history of the now dwindling Salton Sea and an examination of its future.

The Salton sea was created accidentally when a canal failed and it dumped enough water from the Colorado river into the desert to turn a 30 by 15 mile wide area into a lake 40 feet deep. In it’s heyday it was a major tourist destination. But time and climate change has caused the sea to dry up, returning it to a desert and sending plumes of dust into the air causing not only a health problem for the people leaving near the sea but also across southern California.

This is a good but kind of academic documentary which spends much of it’s first third exploring the history of the sea before shifting gears and exploring what can be done to stop the dust and perhaps bring the sea back. I was interested in what was being said for about half the running time, then my interest waned. Watching the film on my couch I got called away and simply went to see what was needed without thinking to stop the film. Not a good sign. I did back the film up when I returned but at the same time I realized I was going to be finishing the film out of obligation rather than desire.

Recommended for any one interest in the Salton Sea. Optional for anyone else.
Posted by Steve Kopian at September 18, 2020