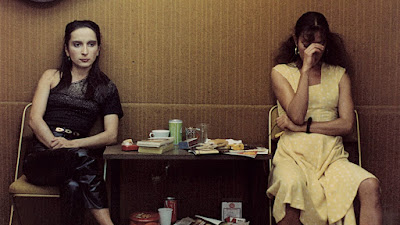 Largely plotless three part film follows Simone who works at an adult movie theater over the course of an evening. It begins as Simone helps patrons into the theater while she banters with a co-worker. They are almost totally oblivious to the men who are coming and going. When the shift ends she heads off to meet her girlfriend who works at a lesbian club. As she heads out she has an encounter with a man prowling about.

A small scale confection I don’t think I had ever run across this film before it’s slot at the NYFF. I find it odd since while the film isn’t earthshaking it is an amusing little gem. While the film’s lack of a plot could have worked against it the film overcomes it by allowing the character to have the room to be and interact. The result is we are drawn into the film and we want to hang out with them.

Truthfully I had a blast. I had such a good time  watching this film I’m going to see about adding it to my collection because I want to revisit the film and the people in it.