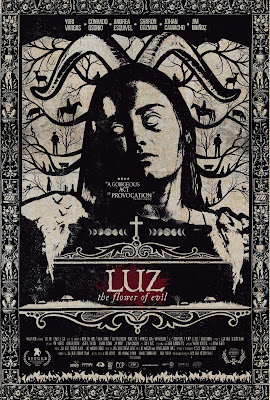 The plot has the leader of a cult living in the mountains bringing in a young man he thinks maybe the messiah. The problem once he arrives things begin to spiral out of control.

I'm someone who is mixed when it comes to folk horror. Sometimes it works but more times then not the deliberate efforts to mimic a folk tale doesn't always work for me. The problem generally is that I think most directors spend too much effort trying to make the form of the film be what they want with the result that they lose the story.  In the case of LUZ  I think that the need to set the table kind of takes away from the horror. Things take a bit to get going and once things begin to happen we aren't full invested. It's not fatal but the film never reaches the heights its aiming at.

Worth a look for horror fans, all others it's optional.
Posted by Steve Kopian at September 15, 2020