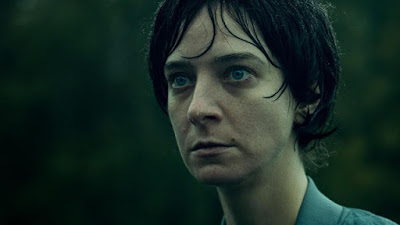 I am trying to figure out what to say about VIOLATION and how much. I suspect that there is going to be a lot of discussion about the film and what transpires. I think I will be limited in what I say because this is one of those films that's best the less you know because then what happens will hit you cleanly from the blindside.

The plot of the film has two sisters Miriam and Greta meeting up again at a cabin in the woods. While they seem loving there is a great deal of resentment between the pair which is constantly threatening to boil over. Of course it doesn't help that Greta's husband has a history with both women. What happens once the sisters reunite is the film.

I'm going to give anyone who wants to see VIOLATION a really big piece of advice. Give the film your complete attention. Turn off the phone and just watch it.  And don't just watch it give yourself over to it. Let it go at it's own pace and don't worry because while it will seem like it is a talky drama for a while things will suddenly go from " I think we've been here before" to "oh shit I wasn't expecting that"  to "oh f#&*!" The film may look like it's a calm and cool film of manners for a while but then the low key nature turns and suddenly bugs are crawling under your skin as it does some unexpected things.

I am deeply deeply disturbed.