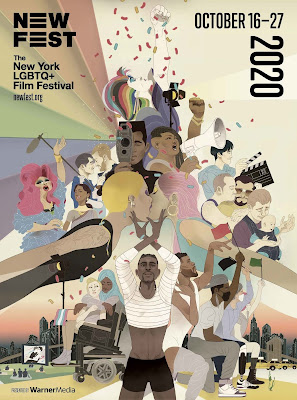 NEW YORK, NY (September 16, 2020) - NewFest, New York’s leading LGBTQ film and media organization and one of the world's most respected LGBTQ film festivals, announced today that The New York LGBTQ Film Festival will open this year with the NYC premiere of Francis Lee’s much anticipated film AMMONITE, starring Academy Award-winner Kate Winslet and Academy Award nominee Saoirse Ronan, being released in the US by Neon. Winslet will also present Lee with the festival’s inaugural World Queer Visionary Award ahead of the special drive-in screening, taking place at the Queens Drive-In at Flushing Meadows Corona Park. The announcement was made today by NewFest’s Executive Director David Hatkoff and Director of Programming Nick McCarthy.

The 32nd edition of The New York LGBTQ Film Festival will take place October 16-27, 2020, with the majority of the program accessible online to ticket holders nationwide. The first-ever virtual edition of NewFest will include a robust lineup of panels and conversations surrounding LGBTQ+ topics, in addition to its regular programming of new features and short film premieres, and will incorporate virtual live events as well as select drive-in screenings. Key art for the festival, illustrated by queer NYC artist Marcos Chin, was released today. The full Festival program will be announced on September 23.

The World Queer Visionary Award celebrates and honors individuals who have delivered immense contributions to both cinema and the visibility of the LGBTQ community throughout the world. Francis Lee, the first recipient of the award, is a NewFest alum whose debut feature, GOD’S OWN COUNTRY, was the festival’s International Centerpiece in 2017.

"In a year when The New York LGBTQ Film Festival will be available virtually in people’s homes throughout the country, we are thrilled to have found a way to kick off the Festival safely in person with a drive-in event,” said NewFest Executive Director David Hatkoff. “We can’t wait to gather with members of our NYC community to celebrate the beginning of 11 amazing days of local and international queer content by collectively experiencing Francis Lee’s stunningly crafted AMMONITE, and to present NewFest alum Francis with this award in recognition of another landmark contribution to the world of queer cinema.”

“We are delighted to feature AMMONITE’s delicate, textured, and humanistic portrait of two women discovering their passion and authentic selves on the largest screen possible in New York City at the Queens Drive-In,” said Nick McCarthy, Director of Programming. “The Queens Drive-In is adjacent to the New York Hall of Science, which will aptly highlight the scientific study of life that Mary Anning was devoted to, similar to Francis Lee’s artistic search for human truth and connection.”

NewFest’s 32nd Annual edition of The New York LGBTQ Film Festival is presented by WarnerMedia. Hyundai and Ogilvy are the Festival’s Signature Sponsors, with additional support provided by Amazon Studios, Netflix, Gilead, Amida Care and Comcast NBCUniversal. The Queens Drive-In at Flushing Meadows Corona Park was created by Rooftop Films, the New York Hall of Science, and Museum of the Moving Image.

NewFest has presented more than a dozen virtual events this spring and summer, including the virtual premiere of the HBO documentary WELCOME TO CHECHNYA featuring a discussion between The New York Times’ Charles Blow and director David France; the discussion “On Being Black and Queer” in tandem with the HBO series I MAY DESTROY YOU; a Pride Shorts Program in partnership with Vimeo; a Family Movie Night event with the NYC Department of Education; an advance screening of the IFC film SUMMERLAND and the Netflix film LINGUA FRANCA; and screenings of the films PIER KIDS and SO PRETTY.

The complete Festival lineup of feature films and special events will be released on September 23rd, with additional announcements to come in the weeks leading up to the Festival. All-access passes are now available for purchase at www.newfest.org. Details on individual tickets will be released following the full lineup announcement.

Email ThisBlogThis!Share to TwitterShare to FacebookShare to Pinterest
Labels: Newfest 2020