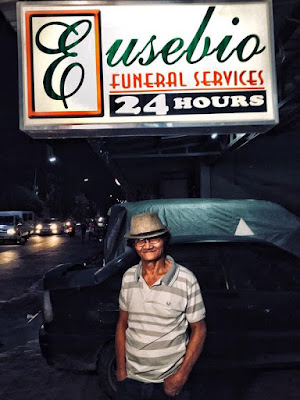 Philippine President Duterte’s war on drug addicts and dealers is given a human face in Leah Borromeo‘s THE MORTICIAN OF MANILA. The film highlights Orly Fernandez who manages the Eusebio’s Funeral Parlor in Manila. Taking in the dead at all hours of the day and night he sees firsthand the havoc being brought by the endless killing by the police and government sanctioned hit squads. Along the way we also get to know Vincent Go and Brother Jun photojournalists who hang out at the mortuary. As the police officials stopped being helpful to the media covering the slaughter Go, Jun and their fellow reporters began hanging out at the mortuary because so many bodies and their families are passing through that it is the only way they can get the information they need tcover the mayhem.

This is a chilling film about justice gone mad. I went in to the film having steeled myself for what I was going to encounter but while the images didn’t bother me, the attitude of many of the people was shocking. While Orly is kind of neutral (as Go say he is neither a devil nor angel but somewhere in between), others are less so, the violence is just part of life and their attitude is troubling. We are supposed to be a civilized world but to allow the endless and senseless killing to go on is sign of the decay of society.

Running a brief 27 minutes THE MORTICIAN OF MANILA packs a punch similar to high speed ride in to the side of a mountain. Working on so many levels beyond the simply portrait of one man's job in a country gone mad, the film is a dire warning to anyone what a shift toward "us and them" where the them can be hunted with out reprisals will lead to. It is much too simple to connect up the dots and realize that this is what America could become if the hatred spewed by the far right ever became the law of the land.

Frankly there is so much to ponder with in this film I am still doing so it weeks after I saw it. So much so that while I wanted to post this very early in coverage of DOC NYC so that you knew to go buy tickets, I delayed hoping to find the words to truly express why and how THE MORTICIAN OF MANILA moved me in a way few films have done this year. I know I am going to have to revisit the film in order to really do it justice.

Sadly I don't have the all of the tight words only my insistence that you must make an effort to see this masterpiece of journalism.

THE MORTICIAN OF MANILA plays November 13th with DADDY AND THE WARLORD at DOC NYC. For more information and tickets go here

The film is will play December 8 on Al Jazeera English / Witness. It was produced by Disobedient for Al Jazeera Witness
#MorticianOfManila #MorticianManila #AJWitness
Posted by Steve Kopian at November 08, 2019