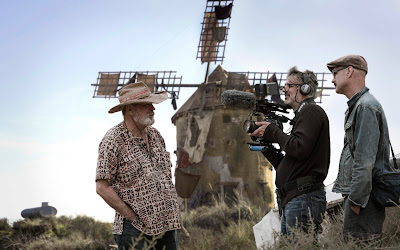 HE DREAMS OF GIANTS moved me deeply.

A companion piece to both Terry Gilliam's THE MAN WHO KILLED DON QUIXOTE as well as the earlier LOST IN LA MANCHA it is a film not only about the making of a film and its creator, but about the need for creation and the obsession it stirs up. The mix transcends your typical cinematic portrait to become something truly great, possibly transcendent and deeply moving.

(Yes, I really loved the film)

I need to begin by saying that I don't know  how you are going to react to the film if you don't know the decades long saga of the making of Gilliam's DON QUIXOTE. I say this because much of what moved me and struck me came from the fact that I, like many people, have been playing the home game in regard to the film. I like many others have been pondering the various twists and turns in the saga and wondering what the film would be. It is something best echoed when you understand that I stood outside the theater where I just saw it with friends and we argued about what THE MAN WHO KILLED DON QUIXOTE was and what the film might  have been.

The film is nominally the story of the finishing of Gilliam's film with the past filled in with clips and such in order to bring us up to speed. We watch as then heads off to actually try and make the film while wondering if it was a project best left unmade. What will happen is he actually gets the thing he has been chasing for so long? Along the way Gilliam opens up about the project, creation in general, growing older and why he kept chasing his own windmills.

Not only is it an excellent portrait of the making of a film, but more importantly it is a look at one man and his obsession. And by obsession I don't just mean Don Quixote, but making films and on a larger level making all things. In talking about one thing he manages to hit reveal greater truths about all things. As writer myself I could latch on to the greater truths behind what he was saying about the drive to create and the obsessions that drive artists.  It is these truths and revelations of understanding that hung with me long after the details of the film shoot had faded from my head. It is  these truths and themes that are going to make those who haven't seen THE MAN WHO KILLED DON QUIXOTE or care about it click into HE DREAMS OF GIANTS.

One of my favorite films of the year and a must see for more than just fans of Gilliam or the film but for anyone interested in geniuses at work.