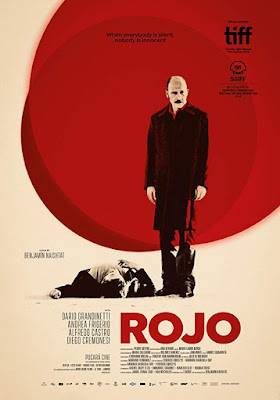 ROJO is a film that is going to keep you off balance pretty much from the get go. It is a film that takes it's own course from the first frame to the last making you feel uncertain about everything that is happening. While nominally a black comedy you may not laugh but instead stare at the screen feeling really uncomfortable.

I am not sure how much to say about the plot. I will say it does begin with a sequence which hangs over the entire film even past the final fade out after the end credits. In it a man enters a restaurant and wants a table. He is annoyed that another man (who is waiting for his wife) is sitting alone words are exchanged, and the situation lurches out of control unexpectedly as insults fly and things go unexpectedly.... and then the film shifts gears into another direction....

What the film ends up being  is a deadpan examination of the way that people end up accepting dictatorship. We watch how people turn a blind eye to things they shouldn't and how people who dare end up moving ahead. It's a biting commentary not only on the situation in Argentina where ROJO was made, but elsewhere.

And it's at this point I'm not sure what I think of the film. Excellent on every technical level the film never really clicked with me. Blame the uneasy tone which kept me at arms length as I squirmed in my seat. To be certain its great movie, but it's not my cup of tea.

If you like heady films that challenge the way you think and feel this film is for you.

Currently out on VOD
Posted by Steve Kopian at November 10, 2019