Nate Hood's 400 words on on RECORDER: THE MARION STOKES PROJECT (2019) which opens Friday 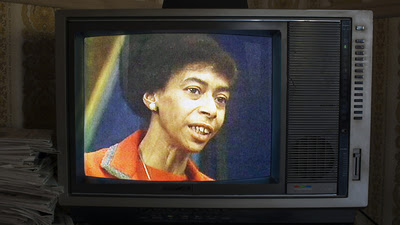 It’s quite rare for a film to outshine itself, to offer audiences a glimmer of some greater artistic instinct lurking beneath the surface. In many cases such moments can redeem a film from the depths of awfulness—or even worse, mediocrity. Matt Wolf’s Recorder: The Marion Stokes Project, is one such example. Exploring the life and work of Marion Stokes, a Philadelphia civil rights activist who obsessively recorded 35 years of television news coverage stretching from the outbreak of the Iranian hostage crisis to the Sandy Hook Massacre on 70,000 VHS tapes, the film is a respectfully crafted yet remarkably chaste piece of documentary filmmaking.

Wolf’s execution is textbook biographical cinema, charting a troubled youth to a firebrand adulthood to a melancholic seniority, interspersing talking heads interviews with friends and relatives so every time we feel we get a handle on Stokes the narrative shifts beneath our feet. And indeed, her story is a fascinating one—her gradual transition from abandoned foster child to community Communist activist to wealthy reclusive hoarder is engrossing, but Wolf never loses sight of Stokes as a person instead of as a composite of strange eccentricities.

Peppered throughout the chronological retelling of her life are concurrent news clips from her archive, and we’re treated to some of the greatest hits of 20th century news. But things change when we reach the 9/11 attacks. The film cuts to a four-way split screen of the major 24-hour news networks as they go about their usual programming the morning of the attack as one by one, in agonizing synchronized real-time, they’re interrupted by Breaking News Alerts about the North Tower explosion. We continue to watch the four-way coverage until their four clocks strike 9:03 am and a second plane crashes into the South Tower, eliciting gasps and shrieks from the newsrooms. I say with little hyperbole that no other film I’ve seen better captures the real-world panic and surreal, reality-warping terror felt by those who lived through the attacks and the ensuing blitzkrieg of wall-to-wall media coverage. This sequence belongs in a museum as a permanent installation, not just as a testament to the attacks but also to the rise of sensationalized television news reporting, the kind Stokes spent her life distrusting and documenting for future generations. It’s the documentary’s mission statement compressed into five unbearable, unforgettable minutes.