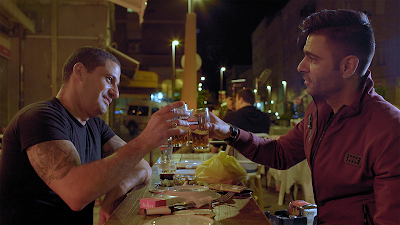 Dr. Nof Atamna-Ismaeel was the first person to win the Israeli Master Chef competition. Realizing that the best way to connect people and break down walls is to share a mill she creates the food festival which will bring together chefs who are both Jewish and Arab, Palestinian and Israeli in order to create friendships and connections based on a love of food.

This is a wonderful film. It is a glorious portrait of not only Atamna-Ismaeel but also many of the people whom she invited to the festival. Its a wonderful look into the various chefs' lives and loves of food. This is the cinematic equivalent to sitting in the kitchen of a really good cook and shooting the breeze while they cooked. Unfortunately since they are on the screen we can try what they are cooking.(this needs to screen with a buffett)

What a great great film.

This film is a quiet little gem that will make your mouth water and stomach talk to you.

Thankfully the Other Israel Film Festival has scheduled it at 4:30 pm on Sunday the 17th so you can make a mad dash after the screening to one of the wonderful restaurants around the Marlene Meyerson JCC where it screens.

For tickets go here (You're on your own with dinner reservations)
Posted by Steve Kopian at November 13, 2019