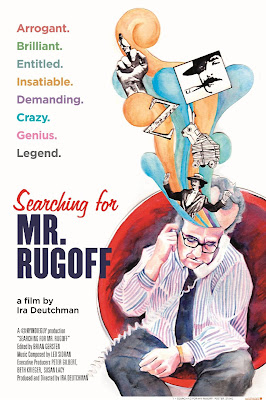 Portrait of Donald Rugoff the madman who founded and ran Cinema 5 which ran legendary theater in New York and distributed some the greatest films from around the world. A prickly pear of a man he annoyed many people on a personal level but delighted them on a professional one. When director Ira Deutchman, who worked with Rugoff hears his name mentioned at the Gotham Awards he tries to look up his old boss and see what happened to him on the internet and finds that there is next to nothing concerning him. Deciding that the man who changed so much about world cinema needed to be honored he went off and chased down those who knew him to gather their stories.

Being a cinema child of the 60’s and 70’s and living in the New York metro area I was aware of Cinema 5 and the theaters that showed their films. Cinema 5 was the company that brought people like Costa Gavras, Truffaut, Bergman, and Wertmuller to the US and got them Oscars. Most of the really cool art films were coming from Cinema 5 and their track record was pretty much perfect. Somewhere along the way, as their named faded from films, I lost track until I saw the logo in this film I largely forgot them. Mr Deutchman didn’t forget and this portrait of the man who taught him everything he knows about film promotion is something special.

So often we see films about people that are forgotten but more often then not they aren’t really forgotten, they are just forgotten by the filmmakers circle. Rugoff on the other hand really is forgotten. I mentioned the film and Cinema 5 to several of my older film fanatic friends and they sighed and said “that’s a name I haven’t thought of in years”. Apparently few people were thinking of them which is why SEARCHING is such a delight.

What I love about the film is that it is not just about one thing. Its about Rugoff of course, but it’s also about cinema and how we think about it. This film very much is an exploration about why we here in the US track to follow certain filmmakers over others- Donald Rugoff put them before us as important and we followed his choices. This also explains why others are left out- he didn’t seem to release films from say Asia as much as Europe.

Also in the film is an exploration of the idea of revisiting the people who shaped our lives. As we all know there are people we meet for brief periods who change everything about us in that brief time. They come into our lives and then are gone never to be heard of again. That happened for dozens of people around Rugoff.  Time and again I think about trying to track down teachers and friends who changed the way I see the world to see what happened to them. This film is an intriguing exploration of what might happen if we did.

And of course there is the nostalgia factor. For me this film is pure nostalgia.  This film is filled with clips and discussions and memories of the films that filled my film going childhood. And on a personal level I was absolutely delighted seeing the clips and filmmakers within the context of the 60's and 70's as well as right now.

Forgive me for trailing off but the more I think about the film the more I am pondering not just the past but what cinema is and how much Ruoff shaped me as a person and my tastes by the films he chose to release. I never met the man but I realize how much he made me because of the films he released

Frankly SEARCHING FOR MR RUGOFF is stunner. It is a film about how the movies got to here.