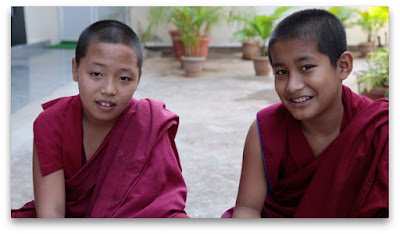 Portrait of the Tibetan Buddhist monastery called Ganden. The original monastery was a centuries old bastion of Buddhism located high in the mountains of Tibet. However when the Chinese invaded and they were forced to relocate. Director Ngawang Choephel profiles the monks who knew the original monastery and those that know the new to discover its place in their faith.

Heartfelt and at times moving film plays for me like a cinematic prayer. Watching the film unfold I found myself carried along by the words and chants as if I was in a religious service. It was like going to a church or temple to which I don't belong and getting carried away by the word and passion of the people worshiping. While words or "god" may seem different, the fervor of belief was exactly the same and I felt transformed on the other side.

I love that the film is far from showy. Many of the shots are simple camera set ups. Choephel simply points his camera at his subject and lets them talk. He knows that the words are enough. There is no need for bells and whistles when his subjects are so eloquent. Some times less is a great deal more.

In all honesty this is a hard film to critique. As you can tell the film worked for me. I can not know if it will work for you. Not only will the simplicity not work for those who need to be distracted by showy things the subject matter and the philosophy may not be your cup of tea. On the other hand if you can click with it's vibe, this will be something special.

Recommended for those who are adventurous or predisposed.
Posted by Steve Kopian at November 13, 2019