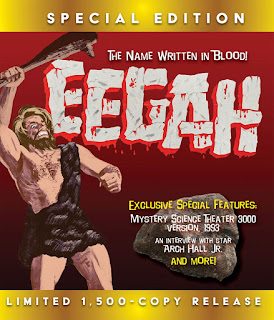 EEGAH (which is some times EEGAH!! and some times with the subtitle THE NAME WRITTEN IN BLOOD), the name sends chills up and down the spine of any movie lover on the planet. Good movies lovers hate it’s creaky low budget quality while bad movie lovers love it for the same reason. It is a legendary bad film that Mystery Science Theater 3000 riffed in the original run of the show and which the live version of the most recent incarnation took on the road. Now the film has been lovingly restored in 4K and put out on Blu-ray and DVD by Film Detective who has guaranteed ticket sales by including the original MST3K show plus some neat extras.

The film is the story of some a young woman and her father who run across and are kidnapped by a caveman wandering in the desert.  Instead of being frightened by him she cleans him up, shaves his beard and cuts his hair. Her "boyfriend" tries to find and rescuer and mayhem results.

The film was made by Arch Hall Sr, a man legendary in some film circles as a man of mixed talent. He produced and wrote the films under fake names. His films, which he largely produced via his own production company were all drive-in fare. They were often starred his son Arch Hall Jr, who was, given the right role better than the material. By no means are the films the Halls turned out great works of art, but all are better than the “bad” movie labels they have been saddled with in some circles. Films such as THE SADIST,  are nasty pieces of work that are much better than you would think or their mainstream reputation (assuming the mainstream writers even know about them). They have a kick that mainstream Hollywood films don’t have, which explains why the films are still being discussed while other bigger budgeted and heavily promoted films from the same period are now on histories trash heap.

As I said above normally Hall Sr only produced, wrote and acted in his films but he was forced to step in with EEGAH and take the reins and the result is an okay little film. Admittedly it isn’t the best, and seems downright awful when seen by an audience of one seated at home. However when seen in a car full of people at a drive in or in a crowded theater where the audience can be part of the fun it’s quality increases. Presently the main reason the film known is a legendary episode of  MST3K where the interplay of Joel and the bots helps the reach its maximum potential. I say this as someone who has seen the film any number of times over the years and I find it always plays best when seen with an audience or riffed.

To be completely honest I don’t know why anyone would want to restore the film with 4K restoration but it takes all kinds. Nothing against the people involved but 4K is the sort of expensive restoration that big huge Hollywood legends like LAWRENCE OF ARABIA  or BEN HUR  get, EEGAH is not in that league.  That said the transfer itself is absolutely stunning and having seen it now both as part of the live MST3K show from a couple years back and on the disc I can’t imagine the film ever looking this good even in its original run. I love that the Blu-ray includes the MST3K episode which is an absolute blast.

The Blu-ray also has a couple of great extras. The first is Joel Hodgeson talking about the film(it runs runs 7 minutes). While I am mixed on Joel’s time as host of MST3K (some episodes are great, some are okay) I have always loved listening to Joel talk about the bad films he loves. Listening to him over the years I’ve always gotten a better sense of the deep feelings of respect that allowed him to chide the films he and his fellows riffed. The other extra is Arch Hall Jr talking about the film for about fifteen minutes and is equally good.

The new restoration hits stores on November 26th and is a must for either fans of the movie or for MST3Kies who are always watching out for snakes. 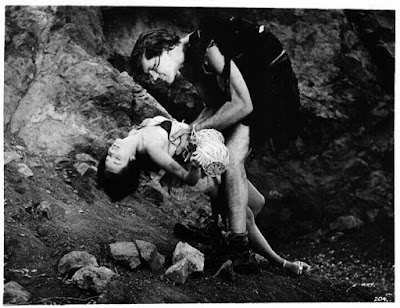