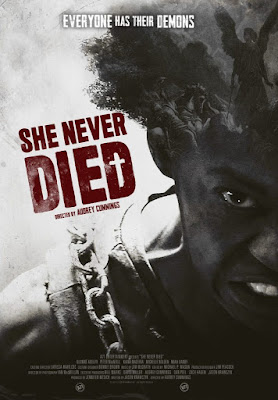 SHE NEVER DIED is one of the best genre films of the year, one of the best films period for 2019 and is also one of my absolute favorite films of 2019. I love this film so much that I am dying for more people to see it so I can discuss its wonders with them.

Th plot is simple: a woman who lives on the street devours the bad guys who wander skid row. She is immortal she and weary of her life. Along the way she meets a cop who suspects there is something about her and she befriends a young woman who had been grabbed by some bad men. I'll leave the rest for you to find out.

Stunning genre film is do damn good on every level that I kept thinking "it can't be this good can it?". I  also kept waiting for it to completely fall apart but it never did, it just went from start to finish with a drive unmatched in most similar films. This film just goes and grows and gets better with each new revelation.

All hail director Audrey Cummings and writer Jason Krawczyk for crafting one hell of a tale. It is a balls to the wall thrill ride that just goes, all the while making you ponder your own existence. Its rare that films this fun are this thoughtful

Seemingly connected to Krawczyk's earlier HE NEVER DIED (which I haven't seen and which appears to have a jokier tone) SHE NEVER DIED stands completely on it's own. You don't need to have seen the earlier film (I only discovered it after the fact), though since I am in love with SHE I am definitely interested in the earlier film...and in the teased sequel.

As good as the writing and direction are the real story here is Olunike Adeliyi who gives one of the great performances of the year. Because of her full bodied performance we have the creation of of one of the great screen heroes. Forget that she is a woman she is just a kick as character and would probably give any of the comic sourced heroes, male or female a run for their money. It is a stunning performance where you can literally feel the weight of millennia and then some on her. Once we know who she is you realize she literally has seen it all and is done with it. With her performance she wrecks the notion of  the joys of living forever. Clearly it isn't skittles and beer. Never mind that Oscar never notices small scale genre films, Adeliyi is so quietly understated that the true magic of what she is doing most of the time is going to be completely missed by most people. Olunike Adeliyi has given a performance for the ages and created one of the great screen characters that I have ever seen. I ache to know what both her character and the actress are going to do next.

A must see not only at Blood in the Snow but where ever you can see it.

For tickets or more information on the Blood in the Snow screening go here.
Posted by Steve Kopian at November 20, 2019

Email ThisBlogThis!Share to TwitterShare to FacebookShare to Pinterest
Labels: horror, The Blood in the Snow Canadian Film Festival 2019