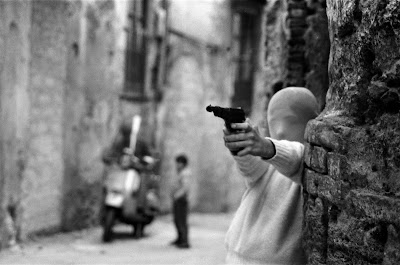 Kim Longinotto’s Shooting the Mafia is one of the most baffling documentaries I’ve seen in some time. It might in fact be the very first I’ve watched that actively defamed the reputation of the subject it was trying to celebrate. That’s no small feat. At no point does it ever intend to portray its subject— photojournalist Letizia Battaglia, the first female photographer in Italy employed by a daily paper thanks to her tireless documentation of the bloody Second Mafia War in Palermo where the murder rate spiked to five assassinations a day—as anything other than a hero. Yet in recounting her accomplishments they accidentally reveal the gaping holes in her legacy.

The blame for this can only be placed on the filmmakers who, halfway through the film, apparently grew bored with Battaglia and shifted their attention to the operatic aftermath of the War, leaving her high and dry. The first half diligently charts her growth into a photographer, beginning with her dissatisfaction with married life after getting hitched at sixteen and the freedom her camera gave her after her divorce. These biographical sequences occasionally border on the mushy, particularly when Battaglia’s various lovers pop up for interviews about their days of passion with this strange woman. But Battaglia’s harrowing recount of the bloodshed she witnessed—accompanied by her astonishing and graphic photos of the aftermath—more than restore our faith in the film.

But around the hour mark the film reveals its true colors, reinventing itself as a historical documentary with Battaglia as a supporting character and talking head. We see the dramatic Maxi Trial held in a steel-reinforced courtroom where 457 mafiosi were tried and 338 convicted. We see the mafia’s reprisals in the twin assassinations of government prosecutors Giovanni Falcone and Paolo Borsellino. And finally we see the arrest and trial of the Sicilian Mafia’s “boss of bosses” Salvatore Riina. And time and again the film cuts to Battaglia who casually dismisses these momentous events, saying she deliberately ignored or avoided them.

The logical dissonance is staggering: why would a woman who spent her life fighting the mafia with her camera—“I want to destroy them”—simply ignore their downfall? Why focus on these events if she wasn’t involved? All it does is inspire our incredulity and contempt. They should’ve just made a straightforward mafia documentary, not bait-and-switch us with a half-baked hagiography.