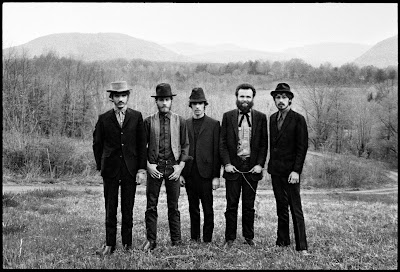 There were a couple of times while I was watching ONCE WERE BROTHERS that I was aware that the people around me were tearing up. I was aware because I was also getting misty and I wanted to see if anyone was noticing the tears running down my cheeks. It was a moment that was repeated several times during the course of Daniel Roher’s loving and heartfelt film about Robbie Robertson who is one of the most influential rock musicians of all time and his band of brothers.

Based on Robertson’s autobiography, ONCE WERE BROTHERS charts Robertson’s life and career from when he started playing music professional on through his meeting Ronnie Hawkins and the forming of what would become known for all time as simply The Band, their tours with Bob Dylan on to their ending at the legendary Last Waltz. It is a tale of men who came together as family and brothers only to have it slip apart.

There is so much to say about this film I know I won't be able to fit it all in.

I should start by saying the one negative thing about the film I can say and that is that this is very much Robbie Robertson's story. Don't come into the film expecting to learn all the details about anyone other than Robertson and you'll be fine. This is Robertson's telling of the story so it expectedly leans toward his version of the story....then again in a weird way we don't get a ton of information on Robertson either.

On the other hand we do get everything we need to know about the history of The Band. As far as the group is concerned it's all here from start to finish and we are so much better for it. This is an incredible portrait of  the work group of musicians who changed culture and the world repeatedly.

Directed by Daniel Roher ONCE WERE BROTHERS rocks the pillars of heaven. Roher was picked by Robertson after several other directors who wanted a crack at the project didn't meet Robertson's gut test. No one felt right until Robertson met Roher who was the same age as he was when he did Music From Big Pink. The pair clicked and Roher's work and drive was so impressive that more and more people, both behind the scenes and in front of the camera, wanted to be a part of the film. Roher's work is masterful and the result is pure movie magic.

In large part the film works because Roher masterfully uses the music like a sharp knife. Songs are perfectly placed in the story to not only move the story but also emotion. I had thought I would see certain songs in certain places and I was dead wrong. Roher placed them exactly where they should be blending every note with the perfect images for jaw dropping effect. How the hell did he learn to cut like this? (And no I am not going to tell you where he put what, just see the movie)

Roher also beautifully weaves new interviews with Robertson, Hawkins and many friends of The Band with existing interviews, performance clips, home movies and tons of photos. Roher doesn't just recall days gone he resurrects it to the point we feel like we're in Woodstock.

And of course the film is a blast of nostalgia. If you grew up on the music of The Band then you will instantly form a connection to the film which details how many of the songs you love came to be. However don't worry if you don't know the music because while I know the audience at the DOC NYC screening was full mostly of fans of Robertson and The Band, there were some people who didn't know them and I could hear from conversations after the screening that they too had fallen under the spell of The Band thanks to this film.

I absolutely loved this film a great deal. In the days since I saw it I have been singing The Weight and other Band songs almost non-stop. It has haunted me and my conversations.

I don't know what else to say other than see it.

ONCE WERE BROTHERS: ROBBIE ROBERTSON AND THE BAND has played its performances at DOC NYC. It is currently on the festival circuit and will be released by Magnolia February 21,2020